CartONG is proud to present its 2019 Associative Project

CartONG is proud to present its 2019 Associative Project

Since its creation and the drafting of its statutes in 2006, CartONG had not updated any document defining its global objectives. With the growth and diversification of our activities in recent years, it had become necessary to draft an associative project that would clarify the social contribution of our organization to society, specify its fields of expertise, (re)define its values and detail our growth over the past 13 years – so as to guide future developments. Discover our association project here!

13 years of growth and evolution 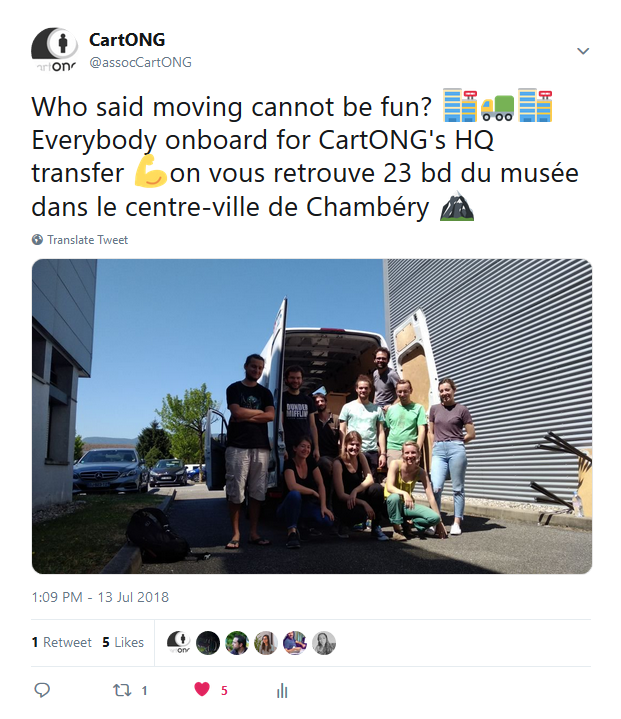 Over the past 13 years, CartONG has tremendously changed. Its scope was originally limited to the management of geographical data, yet CartONG's field of expertise has expanded with the arrival of new technologies so as to meet the technical, strategic and ethical challenges of the humanitarian sector. In recent years, we have also extended the range of contexts, partnerships and spheres of action in which we operate. These now cover numerous humanitarian and international development areas. More recently, we have started implementing and supporting social action projects in Europe. These changes have been accompanied by a strong growth of the structure, both of the staff team and of its community of members and volunteers - a growth that has led to 4 moves in the last 5 years! Faced with all these evolutions and being part of a sector of activity always in motion, it seemed necessary to take the time to clarify our social contribution, the values we wanted to promote - which were already partially implemented in our projects - and the future developments we wanted for our organization. In January 2019, under the guidance of CartONG's board and management team, it was thus decided to launch the design of an associative project that would complement our statutes.

Launch of a collaborative process

In keeping with our rather horizontal organizational functioning mode, it very quickly became obvious that the drafting of an associative project should imperatively be open to as many people as possible: board, staff team, members and volunteers of the association. A proposal for a working methodology was thus prepared by the President and Vice-President of CartONG, Charlotte Pierrat and Vincent Taillandier, in order to facilitate the exchanges between these different groups of participants. In particular, the methodology took into account the different tensions that could emerge as part of the process, and the need to address them: tensions between inclusion of all vs. motivation of each of the participant, exhaustiveness vs. feasibility, consensus vs. need to open up the discussion, and participatory approach vs. collaborative approach. 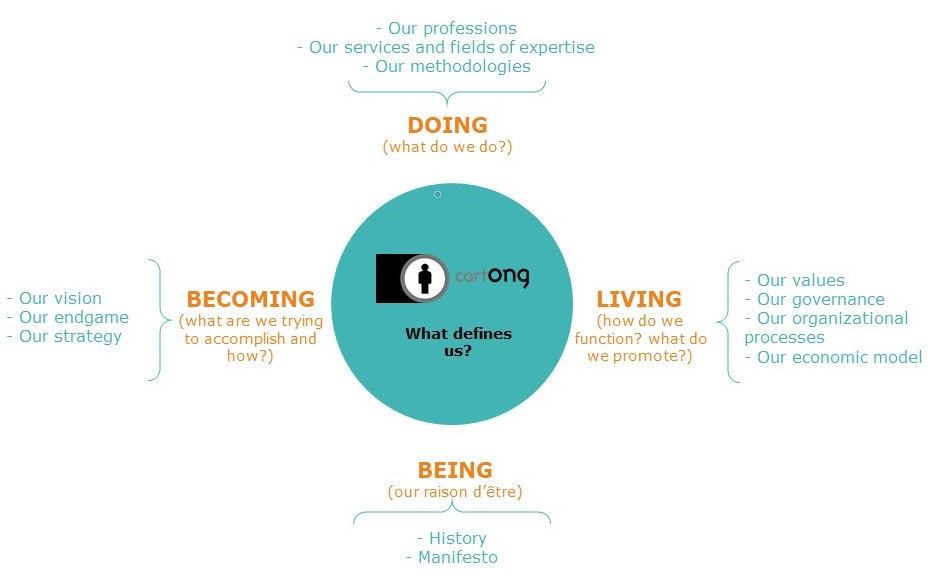 In order to promote exchanges as much as possible, the creation of 7 working groups were suggested as part of the process, including 3 support groups (documentation, consolidation and proofreading & translation) and 4 in charge of making proposals on key themes (see on the left). In parallel, an indicative calendar was proposed to frame the process over time. The main challenge was to ensure that a first version of the associative project would be ready for the Spring 2019 Get-Together, so as to discuss it with the participants.

What is a "Get-Together"? CartONG organizes twice a year a weekend of exchanges bringing together members of the board, employees, CartONG's members and volunteers. These gathering moments contribute to the associative dynamics of our organization and allow everyone to better understand and participate directly in its functioning. They also allow participants to discover the latest implemented projects and discuss the future developments of CartONG in a friendly environment. Discover the latest edition in pictures.

At the end of January 2019, this working methodology was presented to the staff team, and the discussions on the associative project were officially launched and opened to all - including to members and volunteers - on a voluntary basis. Each person was then able to join one or several groups, while specifying to which degree they would be able to contribute (ranging from a one-off participation in a given group to its coordination as "captain" of the group).

Within two weeks, the working groups were set up and the first gatherings of the 4 main "Being", "Doing, "Living" and "Becoming" groups took place. Each group, led by a captain, then chose its own internal operating mode. Some groups opted to work in plenary session using online collaborative tools, others opted to conduct interviews with staff and members who did not belong to their working group, and others preferred to divide the work between group members (to be conducted in-between meetings by a single individual). On average, each of the groups used several working methods to ensure that the diversity of opinions existing at CartONG would be represented.

In parallel, the consolidation group met twice in March 2019 in the presence of the group captains, in order to discuss the progress made by each group and to address any potential obstacles. The idea was also to keep each other informed so that several groups would not duplicate work on the same subject. At the beginning of April, the consolidation group then began to gather the first drafts written by the 4 main working groups, in preparation for the Get-Together of the weekend of April 13th and 14th, 2019. This process was meant to be as transparent as possible, so all points of disagreement that had emerged in the different groups were kept in the first version of the associative project in order to be able to discuss them with all participants during the Get-Together.

The Get-Together of April 2019: the highlight of the exchanges 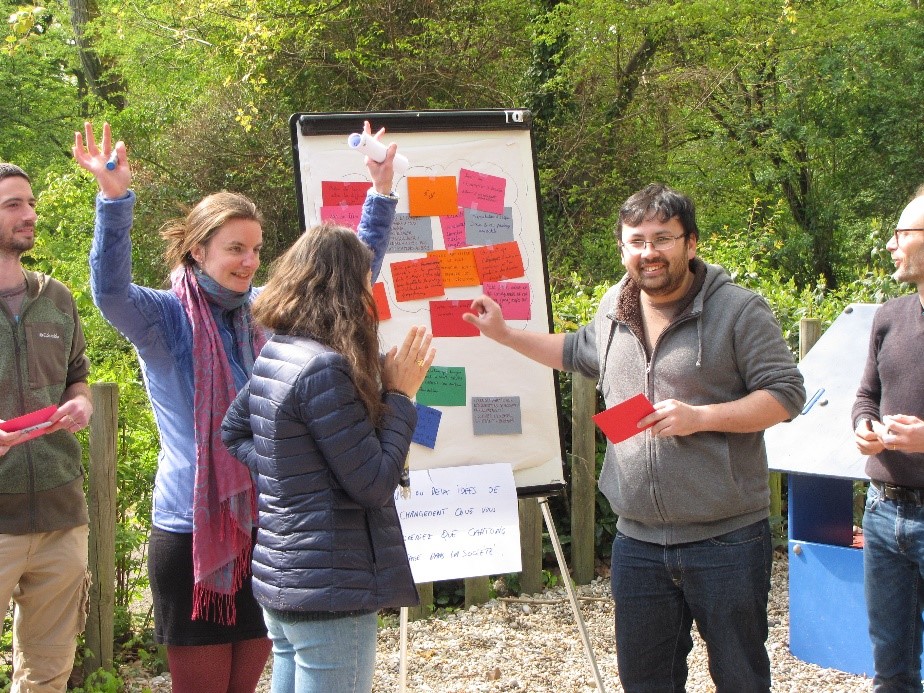 Following the first written feedback and the importance of this undertaking for CartONG, the choice was made to dedicate the first day of the weekend to the associative project. The Saturday morning thus focused on a few main points during a standing plenary session: the history of CartONG based on the work carried out by the "Being" group using an interactive timeline they had prepared, a first brainstorming session on CartONG’s main values based on the proposals made by the "Living" group, and, finally, a major sequence on our social contribution as an NGO combining the work of the 4 groups during which participants were invited to express their opinions on a series of questions (Which CartONG projects are you the most proud of? What types of projects would you like to implement or see implemented in the future? etc.).

In the afternoon, participants were then asked to choose a working theme and to start writing short paragraphs in order to compile a revised version of the associative project by the end of the day - building on the work already done by the 4 main groups in March and April 2019. Staff, CartONG's members and volunteers had the following options:

At the end of this afternoon of work, a second version of the associative project had been compiled and distributed to all members for review and comment in the evening. Thanks to the work conducted in the afternoon, we managed to reaffirm the 6 key values of CartONG (Human-centric, Professionalism, Agility, Autonomy, Collaboration and Connectedness), but also to clarify CartONG's social contribution. By the end of the weekend, CartONG was no longer "just" an NGO working with humanitarian and development actors, but "a Non-Governmental Organization whose mission is to put data at the service of humanitarian, international development and social action projects". This was also the opportunity to reaffirm CartONG's role as a multidisciplinary resource and expertise center, and as a training and awareness-raising actor. The enormous amount of work conducted on Saturday, was then celebrated as it should be with a big meal. 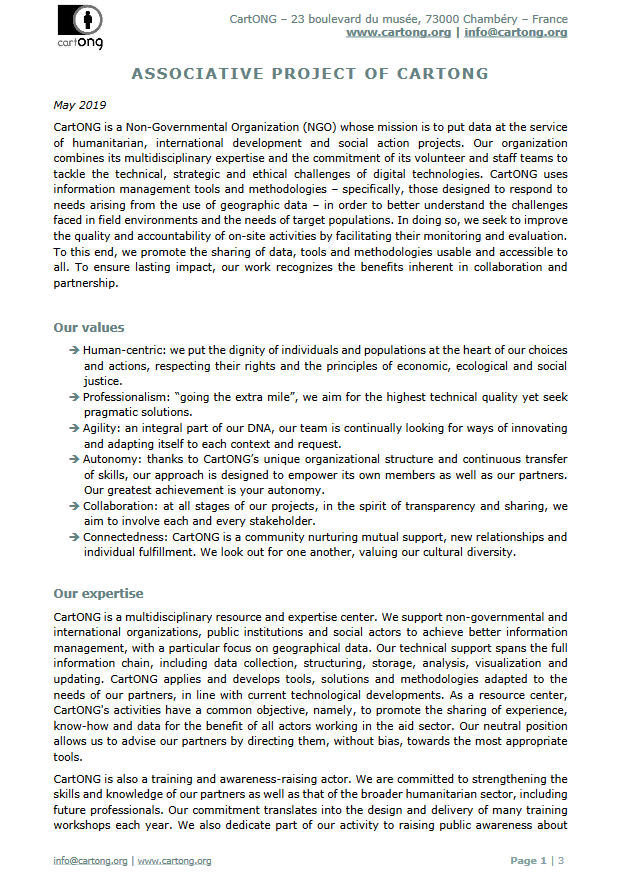 Validation phase and next steps

Following the Get-Together, the consolidation group resumed its work by reviewing the second version, to which were added the paragraphs on governance and the economic model that the "Living" working group had previously prepared. The associative project was then validated by the board, and sent to all CartONG's staff and members for approval, thus concluding a participative process of almost 5 months! Check it out here.

As the associative project is by definition a "living" document, CartONG expects to have to modify and/or complete it in the coming years. For the time being, the entire team - board, staff team, members and volunteers - are enjoying the conclusion of these 5 intense months, which were full of emotions, exchanges and sharing moments. In the continuity of this work, CartONG will now seek to materialize the (re)asserted intentions of its associative project, about its economic model, its internal governance and its relations with partners. We hope that by reading this document, our partners and those who have recently discovered us will be able to better understand the current positioning of our NGO, and that it will help foster new collaborations and commitments!

We also invite all those interested in CartONG's associative project to get involved in the activities of our association. To do so, you can choose to join CartONG as a member, become a volunteer or contact us to develop new partnerships. More information here.