Following our previous disaster risk reduction project, we had hoped for several years to re-launch a large-scale collaboration with the OpenStreetMap Madagascar (OSM-MG) community, which we have been supporting since its early days. The opportunity arose through a partnership with Secours Islamique France (SIF), in the framework of the Avotia project, co-financed by the French Development Agency.

Overall, the project had 3 main objectives:

To this end, we developed a hybrid methodology which would allow to develop the capacity of SIF teams and strengthen the OpenStreetMap Madagascar community contributing to the project, as well as include remote and in situ data creation on OSM, and participatory workshops with local communities.

The project was initially supposed to be carried out over the course of 2 years, but the Covid-19 pandemic deeply impacted its implementation: we were only able to really start our support to SIF in the fall of 2021 when Madagascar's borders reopen, with only 6 months remaining.

The first step was to discuss - remotely - the expectations and capacities of SIF: while their teams were already working with communities in a participatory approach, they had no mapping skills and limited experience in data management (household surveys only).

CartONG also completed the highly incomplete basemap of the area during several collaborative mapping events, also called "mapathons". For this project, we had no less than 165 contributions spread over 31 mapathons. This valuable support from our volunteers allowed the mapping of 37,235 buildings and 4,322 km of roads and paths on the HOT Tasking Manager.

We then organized a first mission in December 2021 with the aim of both assessing the capabilities and needs of SIF, and conducting an initial training. To do this:

The mission also helped clarify the expectations of and resources available to SIF (via a workshop), and allowed us to co-develop the methodology of the participatory mapping workshops:

Following this first mission, we prepared the methodology of the workshops, by creating the maps that would be used during the workshops. At the same time, we tried to make the students and the SIF team practice remotely, even if time constraints and the context did not allow us to go as far as we hoped so.

During this time, we assessed what was the best option for map renderings was:

Following discussions with the SIF team, and given the importance for the communities and local actors to have access to the data they would have contributed to create, paper maps were opted for.

After a preparation period in Antananarivo, the CartONG/OSM-MG team deployed again to Morombe in February/March of this year, joined by the group of students trained on OSM, for a collection mission in the 6 municipalities of the project. The program was as follows:

Despite the logistical challenge, the collaboration was very smooth between the students and the SIF team, drawing on their respective technical and field expertise. The technical problems encountered in the field were all solved as they arose, confirming that a thorough field data collection phase is necessary after the training for proper appropriation - while operating 100% remotely remains far less efficient.

Results of this project 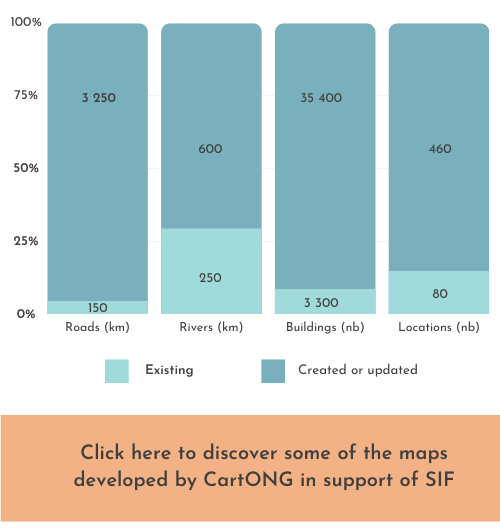 The data collection allowed the integration to OpenStreetMap of 516 points on the 6 municipalities, a quantitative contribution but also and especially qualitative, which will be useful both to the SIF project and to all actors of the territory (development agencies, governmental organizations, but also tourists or visitors). This is clearly visible, taking the example of a village covered in an exhaustive way like Ambahikily, which in addition to a complete base map (road and hydrographic network, urban tasks, buildings), also includes all the key points of interest of the territory linked to transportation, health, worship, trade, etc.

Data collection being conducted both remotely and in the field has resulted in a very significant addition to the basemap of the territory, as evidenced by the opposite figures, comparing data created before July 2019 / since July 2019 (project period).

In parallel, team workshops were held to raise awareness about mapping and to use the local population as a direct source of information for understanding territorial dynamics. Participants contributed to three maps: activity types, crops and hydrography, and food dependency systems. The completed maps produced the dense and comprehensive material included in the final deliverables of the project, and the participants took great ownership of the methodology and were delighted to have their field expertise taken into account.

19 final maps were produced after the second mission and grouped the information on the 6 communes (by type), with the addition of a map at the district level and a map containing the feedback from the workshop on food dependency.

Finally, a feedback workshop was organized in Antanarivo for about twenty participants (professionals, NGO leaders, students, members of the local OSM community).

To go further: a few learnings

In conclusion, in spite of a highly disrupted agenda, the project fulfilled most of its objectives, and allowed for various interesting learnings. From a technical point of view, the use of OpenStreetMap has once again extremely positive, and the coupling with the participatory workshops "on paper" has allowed a relatively exhaustive coverage of the data collection, despite the complicated field conditions. Working exclusively with open source and low-tech tools (no server or software dedicated to the project) has thus proved its worth even for a large-scale NGO. The initial objective of empowering SIF in the use of OSM tools could not be fully achieved due to the short timeframe, which raises the question of the relevance of such a comprehensive training for a short project. Nevertheless, the acquired skills will be useful beyond this particular project, and the repetition of such projects would ensure their sustainability.
Partners and communities have favored paper maps which are more usable locally than dynamic (or web map) solutions, however editing them is much more time consuming. Eventually, CartONG would like to develop an easily deployable web mapping tool that generates customizable PDF maps, which would take the best of both solutions - we are actively seeking funding to move forward on this aspect.
The budget, especially in a context of unpredictability of many costs, was too limited to allow us to go further on different aspects (sustainability, transfers of skills, capitalization, comparative study of different methods, etc.). Despite the efforts of SIF to ease logistics and implementation on the field, the project resulted in significant additional costs covered by CartONG, which is not sustainable in the long term.
The cooperation with OpenStreetMap Madagascar was crucial to the success of this project, but various factors (emergency, time lag between the writing of the project and its implementation, evolution of the community) did not allow for the shared implementation - in the leadership of the project - originally planned, which led to some frustrations and further challenges. Implementing an ambitious data collection project in the field, training and accompanying an operational partner with limited experience in data issues, and at the same time working in partnership and supporting the development of a local OSM community: combining all three aspects - with a limited budget - became an almost impossible task.
In line with our 2022-2024 strategy, we would like to design these projects differently in the future, with a more assertive leadership from the local community and CartONG acting mostly as support, although this may prove contradictory to the urgent and operational imperatives of our humanitarian partners. We thus hope to continue this ongoing reflection throughout the implementation of our first strategy, through exchanges with other organizations facing the same contradictions (notably during the 2022 GeOnG forum) and, as always, by listening to our partners from local OSM communities.
Support to SIF's Avotia project in Southwest Madagascar on OpenStreetMap and participatory mapping
Mapping & GIS
Secours Islamique France (SIF)
Scroll to Top