In April 2019, the Gesellschaft für internationale Zusammenarbeit (GIZ), the German development agency, started implementing a new initiative called “Technology Based Adaptation to Climate Change in Rural areas of Tajikistan and Kyrgyzstan”. This project, which is financed by the Federal Ministry for Economic Cooperation and Development (BMZ) aims at strengthening adaptation measures to climate change in both countries.

CartONG’s involvement in this larger initiative started in February 2021 following a Grant Agreement with GIZ Tajikistan for a project named “Addressing climate change through participatory mapping: using technology and community-based approaches to support climate change adaptation in rural Tajikistan”. This project, the first of its kind, uses geographic information and open-source technologies to support climate change adaptation. It also builds upon a participatory approach by actively involving local communities as well as facilitating the close cooperation of various local stakeholders. It is carried out with the support of our partner Little Earth, a tajik environmental NGO.

In the last 12 months of implementation, Little Earth - with support from CartONG - has thus conducted extensive participatory mapping activities remotely and in selected project regions. For its part, our team has worked on strengthening the capacity of Little Earth’s team, building upon its experience in the OpenStreetMap (OSM) community and field mapping activities. Let’s have a detailed look!

The main mission of the project was to increase the production and availability of geographic information for the rural regions of Tajikistan that are the most vulnerable to natural disasters, by creating a thriving voluntary-based OpenStreetMap community. Traditionally, mapping is mainly in the hands of professional cartographers - the participatory mapping approach has thus revolutionized the world of mapping by shifting mapping competences and tools towards ordinary people.

In order to ensure sustainability, transparency and accomplishment of our actions, CartONG has decided to push for a train-the-trainers approach, by working closely and as one team with its local partner Little Earth. To this end, CartONG has supported Little Earth in learning how to use several open-source tools such as OSM, Tasking Manager, JOSM, OsmAnd and FieldPapers, as well as in organizing remote participatory mapping activities called "mapathons". In this regard, two of our staff were sent to Tajikistan - one for a short mission, and a second one for a few months - to closely work with Little Earth on the different project activities. Little Earth was then able to introduce remote and field mapping techniques to various groups of interested people, in Dushanbe and in selected villages. Novice mappers and seasoned GIS professionals alike have participated in various training and mapathons as well as field activities.

“Through a partnership with French NGO CartONG, Little Earth gained a unique experience in mapping using OSM, which was a new area for our team. Now we can use open data in our future work, as well as teach mapping to other interested stakeholders. Colleagues from CartONG were skilled and wise mentors throughout the project, who taught our team not only to plan activities in a new way, but also to find better solutions for project tasks through well-coordinated discussion and teamwork. Also, within the framework of our joint project, Little Earth visited new vulnerable regions and established good contacts with local partners, where our team is going to continue our practical energy efficiency projects.”
- Natalia Idrisova, Project Coordinator at Little Earth

Core activities of this collaborative project

1. Remote baseline mapping through the organization of mapathons, where the most prominent features such as buildings, roads and rivers were traced on top of satellite or drone imagery; with a validation phase, where the quality of the mapping process, as well as the consistency of the data were checked and improved by more advanced mappers.

2. Field work, where additional information relating to disaster risk preparedness and response were collected that could not be identified from the imagery (localization of schools and health points, passability of the roads, etc.). This local knowledge was gathered via another type of participatory mapping, using OsmAnd, a dedicated digital data collection application, and FieldPapers, specially designed sheet of papers for data collection, in order to streamline the later integration into the OpenStreetMap database. In total, 5 villages were mapped: Shing, Panjrud, Merghuzor and Padrud in Penjikent district, and Romit in Vahdat district.

The screenshots below show, as an example, the state of the map in a few villages before and after the project: 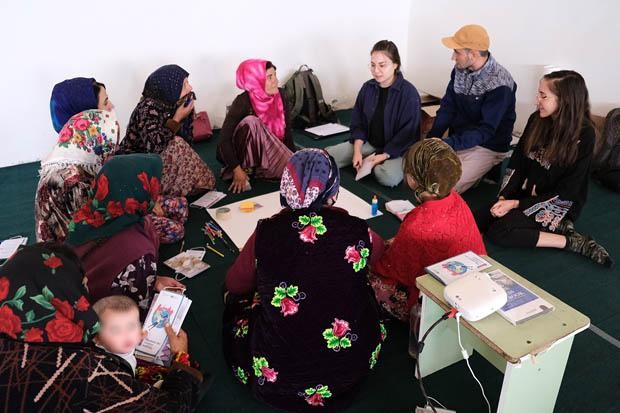 The field work also comprised workshops on awareness raising on climate change, and appropriate adaptation measures discussion through a subjective mapping exercise, another type of participatory mapping approach. Communities, split into two groups based on gender, were asked to draw on a big sheet of paper a map of their village and identify the places or livelihoods – either current or from the past – that are most at risk or that have been affected by natural disasters or climate change. This workshop aimed at taking into account gender as a factor in how climate change might be interpreted at a local level. Based on the subjective maps, discussion was then conducted on ideas of potential adaptation measures.
By engaging the local communities in the reflection and decision process, it helps to come up with a more comprehensive analysis of disaster risk reduction and climate change adaptation stakes in the target areas. It also ensures that the adaptation measures that will be implemented will be more efficient and adapted to the communities’ needs.

3- From data collection to data visualization and data sharing

Data collection in itself can only do very little for climate change adaptation. Only when it is shown or visualized in an appropriate way can it be used to trigger discussions and action. Therefore, two types of final products were produced. After the data integration and validation process, big-size printed maps of the villages were created and handed over to the local authorities and stakeholders that were visited during field work.

Raw data was also published on the National Spatial Data Infrastructure of the Republic of Tajikistan, so it is in free access to all interested parties, including government bodies, local authorities, organizations and citizens.

10 months of implementation in a few facts and figures

Even if launched during a pandemic - which has required CartONG to be particularly agile and find new ways of working with its local partner Little Earth to conduct the field activities - this project has proven to be a real success. Here are some of its key achievements.

In just ten months, more than 30 on-site mapping events - mapathons and validation sessions - were held to conduct the base mapping, resulting in up to 180 vulnerable Tajik villages mapped and validated in OSM.

Our team has also trained and certified a group of active mappers and validators who have become a pillar for the formation of the OSM community in Tajikistan. What’s more, as a result of productive networking, the OSM Tajikistan community recently became an active member of the Open Mapping Hub-Asia Pacific which provides additional support for the thriving voluntary-based OSM community.

The project team also managed to hold a number of meetings and consultations with international organizations, local companies and NGOs, researchers, and volunteers on the usage of OSM in their own framework of activity, thus contributing to the structuring of a locally informed stakeholders ecosystem. For instance, this project brought a Mapping Club to life, the latter is still meeting every week at the American Space in Dushanbe. We also have had the opportunity to work closely with the German Red Cross, currently operating in Tajikistan, which supported the organization of eight online mapathons in total. Thanks to this capacity-building and awareness-raising work, the project team strongly believes that the OSM community in Tajikistan will have many significant outcomes and progress in the future.

Finally, in an endeavor to share our experience and the expertise acquired in applying participatory methodologies, our team has also actively participated in different thematic summits and conferences in the past few months, including GISCA, Hot Summit 2021 (you can watch the recording of the session here), AGSE, GIZ LandHub and the 2021 ICRC Analysis & Evidence Week Conference.

In the remaining weeks of the project, CartONG and Little Earth will work together on outlining the main lessons learned of this project. They will be reported to GIZ while CartONG will also build on those for future projects whose contexts are similar to this one. We will also make sure to disseminate the final findings in our March 2022 newsletter.